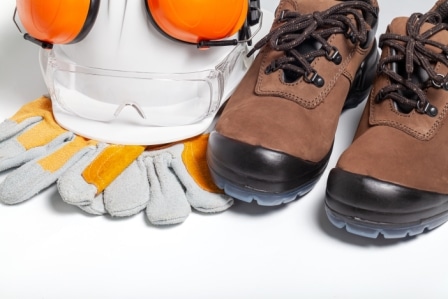 To meet and exceed the safety standards expected of safety footwear. Manufacturers have to meet the ASTM Standards for Protective Footwear. ASTM F2413-11 was the accepted Standard for footwear with the protective toe cap. The standard mentioned the specifications and performance requirements. Under the specifications, it mentioned the expected design and its performance. This article explores the purview of the ASTM F2413-11 Standards–its codes & labels – while describing the protection offered by the compliant footwear.

These two specifications were to be subjected to standardized tests. These tests mention procedures to test for various safety classifications. This standard applies to soft toe footwear under the non-safety category. They have been tested for Static Dissipative (SD) and Electrical Hazard (EH) properties.

The manufacturers and suppliers are to ensure the footwear meets and exceeds the ASTM F2413-11 requirements for each footwear designation. They are to continually update styles, features, and safety characteristics of the safety footwear. This will not only help meet industry requirements but also bring maximum safety to the user.

To keep abreast of the industry needs the designs, materials, and construction of the safety footwear are reviewed. The committee meets every five years to revise the standards. The ASTM F2413-11 Standards were updated in 2018. These new guidelines were designated as ASTM F2413-18.

These guidelines replaced the ASTM F2413-11. The ASTM Committee allows transition time as they realize that existing inventories have to be cleared. The manufacturers and suppliers are expected to complete the transition in 1 to 2 years.

These Standards specify the performance requirements for protective toe cap. They also discuss the design, its 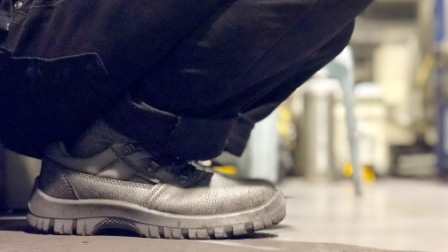 classification, and performance. These three parameters have to be subjected to standardized tests that lead to the certification of the footwear. The footwear is tested by third-party laboratories that certify the performance of the product. These labs issue a certificate to this effect.

ASTM Standards follow an identification code that is placed as marks on various parts of the safety footwear. These codes are;

I/75 denotes Impact Resistance. It is read as Class I/75 footwear. The footwear is supposed to offer a clearance of 1/2 inch for men and 15/32 inch for women’s footwear after an impact of 75 foot-pounds.

C/75 denoted Compression Resistance. It is read as Class C/75 footwear. The compliant footwear is 1/2 inch clearance after being subjected to a pressure of 2500 pounds or more.

This impact and compression resistance will be offered by a Composite or a Steel toe. 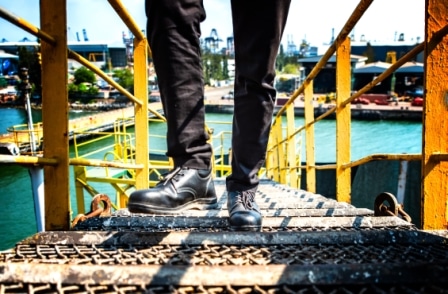 Steel Toe (ST) is made of non-corrosive metal. This protective toe is at the tip of the boot is supposed to meet and exceed ASTM F2413-11 Standards.

Mt/75 denotes Metatarsal Protection. This footwear has a plate constructed into the upper. This plate can withstand a force of 70 foot-pounds. And offer a 1-inch clearance to the metatarsal area of the foot. If the boot meets this criterion it is said to meet Class Mt/75 ASTM F2413-11 Safety Standard.

Electrical Hazard (EH) Protective boots have shock resistant soles and heels. These boots are said to meet and exceed ASTM F2413-11 Standard when they can withstand 18000V at 60Hz in dry conditions. They will tolerate the current for a minute when there is no leakage or flow over 1mA. The outsole serves as a secondary protection against electric shock. This boot protects the user from accidental contact with live wires, power circuits, energized apparatus, conductors, and parts.

Static Dissipative (SD) boots maintain a sufficiently high resistance to prevent the possibility of an electric shock. The footwear should offer a resistance between 1 – 100 megohms when 50V is applied. Then the boots are said to meet ASTM F2413-11 Standards.

Slip Resistant (SR) boots are expected to meet and exceed the Mark II Test specified by the ASTM F1677-2005 Standard for Slip Resistance.

Puncture Resistant (PR) boots have plates pressed between the insole and outsole. This plate is supposed to be an integral part of the boot’s construction. If the boot withstands a force of up to 270 pounds through its heel and sole area. It is said to meet the ASTM F2413-11 Standard for puncture resistance.

The footwear manufactured to the specification of the ASTM F2413-11 is marked. These marks inform the user of the standards the boot complies with. One boot in each pair is marked legibly with this code. The marks may be 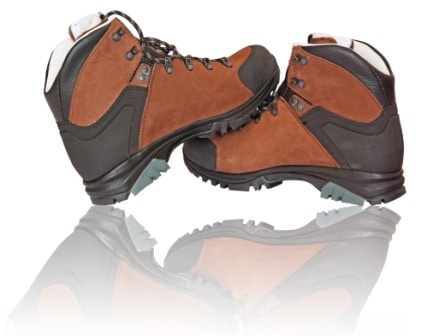 put on a pressure-sensitive label. Or they may be stamped on or embroidered. These labels may be placed on the quarter lining, gusset, tongue, or shaft.

The markings are enclosed in a rectangle. The information or the code is printed in a four-line format. Line four is only used when over three sections of the ASTM F2413-11 Standards apply. A mark should be placed on the toe of the boot to indicate the Protective Toe (PT) accompanied by the manufacturer’s logo/trademark.

The identification number of the cap, the size of the toe cap, if it is for the Right (R) foot or the Left (L) foot should be marked indelibly and conspicuously on the boot. Similarly, each Metatarsal (Mt) and Puncture (PR) Protective device should be marked on the boot. The manufacturer’s logo or trademark and the identification number of the device should be put in a conspicuous location.

Here is an example of an ASTM F2413-11-compliant marking on safety footwear;

This line informs you that the safety boot complies with ASTM F2413-11 Standards. It meets and exceeds the performance standards specified by ASTM International for the year 2011. 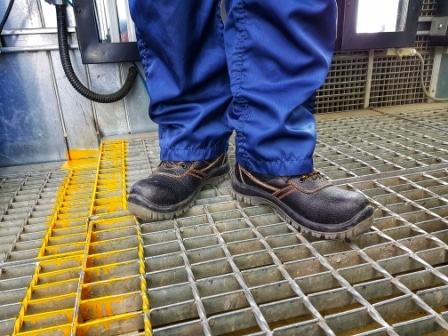 This line informs you that the boot is meant for a male (M). It would be marked with F if it was meant for a female. The marking I/75 indicates Impact Resistance. The boot has been tested to withstand 30, 50, and 75 foot-pounds of force. And C/75 indicates Compression Resistance. This boot has been tested to withstand a force of 1000, 1750, and 2500 pounds of compressive force. These ratings are correlated to 30, 50, and 75 ratings of Safety boots.

This line informs that the boot carries protection against various hazards. In this case, it is Puncture Resistance (PR) and Metatarsal Protection.

Other types of hazard protection may be mentioned in this line. Such as EH, Cd, SD, etc.

Puncture Resistant (PR) footwear has protective plates built into the sole of the boot. The plate is the sole that will withstand up to 270 pounds of force from an objecting impaling from underneath. Then it is subjected to 1.5 million flexes. The ASTM F2413-11-Compliant boot should not crack or show signs of wear. The boot is also subjected to the Fog apparatus, which is a Standard Practice of ASTM B117-11. The protective device is exposed to a 5% salt solution for 24 hours. The boot should not be any signs of wear or corrosion.

The Metatarsal (Mt) Protection can withstand the force of 75 foot-pounds. A protective plate or device is built into the upper of the boot. The device protects the foot from injuries because of objects dropping on the upper foot and toes. Any changes to the design of the ASTM F2413-11-Compliant protective footwear nullifies the certification. Any addition or subtraction to the design requires the footwear to be re-tested.

Electrical Hazard (EH) Protection is offered by footwear made of non-conductive materials. These are 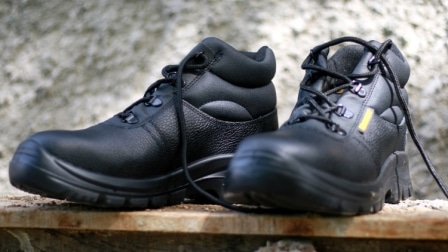 shock-resistant heels and soles. The outsole serves as a secondary source of protection. The sole can withstand up to 18000V at 80 Hz for a minute. There should be no leakage or flow of current over 1mA. The protection is compromised in wet conditions.

Conductive Protection (Cd) guards against hazards due to the buildup of static electricity. This reduces the possibility of igniting volatile chemicals and explosives. This footwear should have an electrical resistance of up to 500000 Ohms. It should be able to ground the static charge in a controlled manner.

Static Dissipative (SD) footwear guards against low resistance. When the boot’s sole is made of high resistance or insulating material, it prevents electrocution. The resistance of the footwear should range between 106 to 108 ohms.

The latest safety standard guidelines are designated F2413-18. They have replaced the F2413-11 designated in 2011. The Safety Standards are revised every 5 years. As safety needs evolve according to industry needs. The footwear carrying this label is tested according to the performance requirements and specifications of ASTM F2413-11.

According to the ASTM F2413-11 Standards, when should the protection against compression and impact be used?

According to Appendix B – Subpart I, Impact and Compression Resistant safety boots should be worn while handling heavy objects and machinery. If the workers are handling packages, moving, or working on heavy 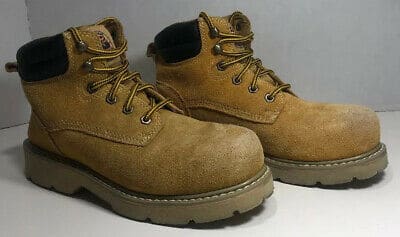 machines, such protection should be worn. If they are handling heavy tools and there is a chance of the object falling or rolling on to their feet. If the employees handle skid trucks or loading heavy pipes or bulk rolls of steel, paper, etc. Boots marked with I/75 and C/75 should be used.

OSHA Standard  1910.136 refers to the ANSI Z41-1999 Standard as the performance criteria. These standards were revised in 2011 to ASTM F2412-11 and F2413-11. These Standards of manufacturing protective footwear are practiced through all industries. They have proven to reduce the frequency and severity of foot injuries. Due to the apparent benefits, they have even been revised in 2018.

What is the difference between Static Dissipative (SD), Conductive (Cd), and Electrical Hazard (EH) boots?

The Electrical Hazard (EH) boots prevent the possibility of electrocution. They are made of non-conductive materials. Conductive (Cd) boots ground the static electricity. They are made using materials and types of cement that do not offer any resistance to the flow of electricity. They eliminate the possibility of a static shock or discharge which may cause a fire. Static Dissipative (SD) boots resist the flow of electricity. The electric charge moves slowly through the material, releasing the static charge in a controlled manner.