ANSI is the short form for the American National Standards Institute. It is a private non-profit agency that administers and coordinates the standards and conformity standards that are practiced voluntarily throughout the USA.

ANSI Z41-1999 is a standard that specifies the testing methods and performance requirements of protective footwear. This standard requires the manufacturers and suppliers to acquire independent lab results for compliance with the specified standards.

These standards are coordinated with international standards so that the products from the USA enjoy a global market. The standards but only cover products, but also processes, systems, services, and personnel. ANSI accredits the standards developed by other organizations, consumer groups, government agencies, etc. The standards ensure consistency in the performance and characteristics of the products and the same terms and definitions are used to describe them.

The products are to be tested in the same manner to maintain the uniform quality of the product and services. This agency also accredits the organizations that conduct the personnel and product certification according to the requirements specified in the international standards.

The Relation Between OSHA, ASTM, And ANSI 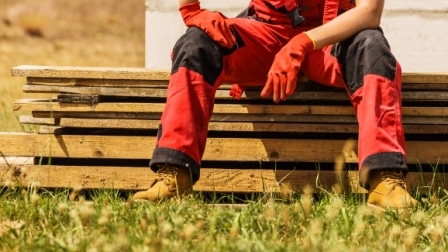 Act of 1970 is enforced. This act recommends working standards for the health and safety of workers. This regulatory agency of the Department of Labor inspects and examines workplaces. It also enforces the standards and provides education, training, assistance, and outreach programs.

ASTM International is an organization that develops standards. They are practiced by voluntary consensus for products, materials, services, and systems. Over 12000 ASTM standards are used worldwide in many areas such as petroleum, metal, consumer products industries, and much more.

These standards have not only improved the credibility of the products, increasing their market access to various parts of the world. The standards have improved product quality, enhanced safety, and health standards for the workers. And improved customer confidence in these products, services, and processes.

ANSI oversees the American National Standards (ANS) and the Conformity Assessments in the US. These standards enhance the global competitiveness of the products, practices, and services. This competitive edge is achieved via conformity assessment systems that safeguard the integrity of the standards.

The OSHA code for Federal Regulations – Title 29 found in 1910.132 states the general requirements of Personnel Protective Equipment (PPE) and Foot Protection (1910.136). The workplace safety requirements and PPE mentioned in 29 CFR 1910.132 are to be made available by the employer after hazard assessment.

The 29 CFR 1910.136 refers to ASTM F2412-05 Standard Test Methods by which the protective footwear is tested. While the F2413-05 Standard specifies the performance requirements of the safety footwear. 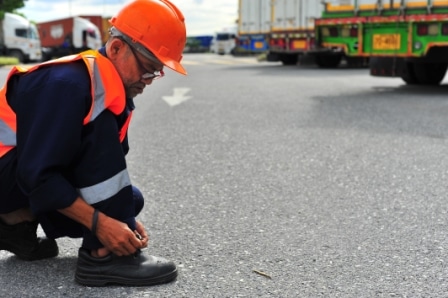 Personnel Protective Equipment (PPE) standards were updated on 9th September 2009. The final rule revised the sections about PPE for general industry, long-shoring, shipyard employment, marine terminals, etc. The rule stated the requirements for face and eye protection devices besides protective foot- and head-wear. The rule went into effect in October that year.

The document mentioned the OSHA standard, the performance criteria by ANSI, and performance requirements according to ASTM F2413.

The description for foot protection in 29 CFR 1910.136 (a) by OSHA is – The employee is expected to wear protective footwear in the work areas where there is a risk of foot injuries by rolling, falling, or impaling objects. The employee’s feet should be protected from sole-piercing objects and electrical hazards such as live wires and static electricity. 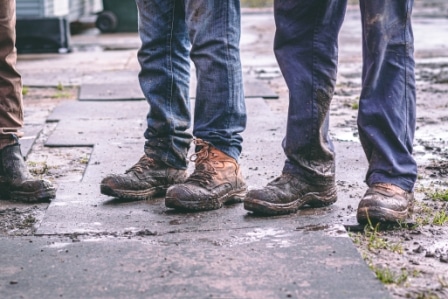 Appendix B to Subpart I also identifies the occupations that should use foot protection. Assemblers, plumbers, machinists, mechanics, and repairers are expected to wear safety footwear. Electricians, carpenters, dry-wall installers, saw operators, loggers, stock handlers, warehouse laborers, and craters are also enlisted among others.

To meet these rules, specifications, and requirements, the ANSI Z41 standard defines test methods and performance measurements for safety footwear. The latest version of the standard is the ANSI Z41-1999. It requires the manufacturer and suppliers of the safety footwear to get test results from independent laboratories to confirm their compliance with this standard.

The footwear is certified only when it meets the requirements for footwear specified in Section 1. All types of footwear should be Compression and Impact resistant. There are additional sections that mention requirements such as conductive protection, electrical hazard protection, protection against penetration, and punctures.

The protective footwear can meet all the ANSI standard requirements or carry only specific elements as long as it has the toe protection specified in Section 1.

This means that work boots meeting ANSI standards may not offer metatarsal protection or EH protection, but it will protect against impact and compression. This footwear will carry a mark of the said protection on that specific part of the boot.

The ANSI Standard coding system is used by manufacturers and suppliers to identify the footwear. The identification code is printed, stitched, or stamped in one boot of the pair. It should be legible. There is an example of an ANSI Z41 mark on the protective footwear – 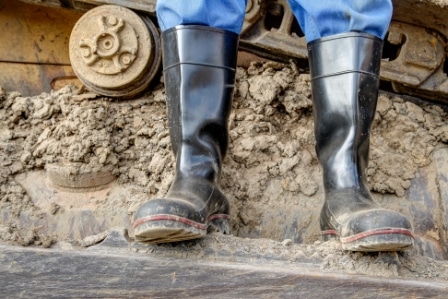 ANSI Z41 identifies the ANSI standard. PT stands for Protective Toe followed by 99. This is the year the standard was put in place – in this case, it is 1999.

These two lines are used to refer to the protection mentioned in the additional sections in the OSHA and ANSI standards. Mt stands for metatarsal (Mt) protection, Cd refers to conductive properties and EH stands for electrical hazard protection. PR stands for puncture resistance and SD stands for static dissipative properties. Line 4 is used only when over three sections of the ANSI Z41 standard apply.

The Metatarsal (Mt) Guard protects and prevents injury to the top of the foot. The current metatarsal resistance rating is 75, 50, or 30 ft-lbs for protective footwear.

The Conductive (Cd) footwear protects the personnel in a work environment where an accumulation of static electricity on the body can be hazardous. The footwear is designed to dissipate the static charge from the worker’s body into the ground. The boot offers electrical resistance between 0 to 500000 ohms. 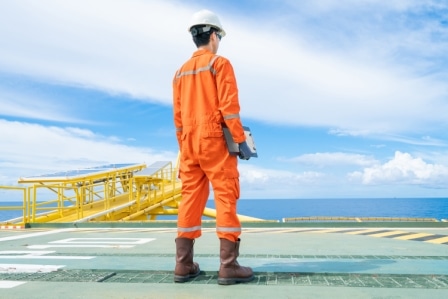 Electrical hazard (EH) footwear has non-conductive heels and soles. They are shock-resistant and serve as a secondary protection against accidental contact with live wires. The EH footwear also protects from power circuits, electrical parts, apparatus, and conductors. The boots can withstand up to 14000V at 60Hz for a minute with no current leakage or flow over 3 mA under dry conditions. This protection may be nullified in wet conditions.

The Puncture Protective (PR) footwear reduces the possibility of injury by a sharp object cutting through the boot’s sole. The puncture-resistant device should be integrated into the boot during its manufacturing process. The boot should withstand the force of 270 pounds. If it is made of metal, it should pass a corrosion resistance test. It should show no signs of corrosion when exposed to a 5% salt solution for 24 hours. The footwear should not crack even after 1.5 million flexes.

Static Dissipative (SD) boots reduce the accumulation of a static charge. The static electricity is grounded while maintaining a safe level of resistance. Type I and Type II are the two static dissipative boot classifications. Type 1 has an SD limit of 106 ohms to 108 ohms. These boots are ideal while working with semiconductors. While Type 2 has a limit of 109 ohms. These boots are meant for workplaces, less demanding than Type 1.

Using ANSI Z41-1999-compliant boots protect the worker’s feet against cuts, burns, impact, compression, and punctures. These boots also prevent falls and slips because of the material of the outsole. This prevents serious problems such as broken bones, head, back, and leg injuries.

Wearing boots that meet regulations lends effective protection. This promotes confidence in the workers thus they 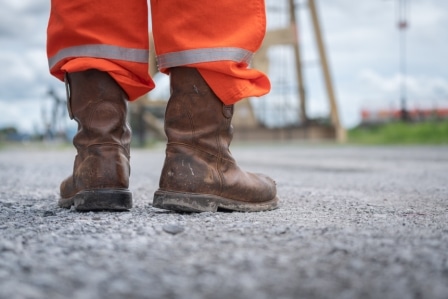 handle the machines and work environment better. This leads to a lesser number of accidents and an increase in production. The controlled risk of exposure to chemicals and harsh environment makes for better work conditions and a safer workplace.

These boots help prevent permanent disability and loss of productivity. Using these boots not only prevents costly penalties for the employer. But also prevents eventualities such as paying worker compensation and the need for an additional hire.

All three types of safety toes – composite, steel, and aluminum/alloy – must pass the compression and impact tests specified by ASTM International.

Is ANSI the same as ASTM? 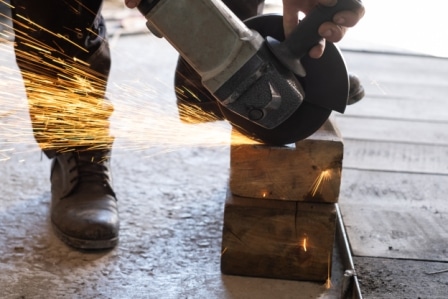 Who are the members of ANSI?

Various academic and international bodies, organizations, government agencies, and individuals are members of this organization. ANSI represents over 270000 organizations & companies besides 30 million professionals.

Describe the process followed by ANSI?

ANSI does not develop standards by itself but oversees the development of standards – their use and accreditation procedures for the organizations that develop standards. Accreditation by ANSI signifies that the procedures used by these organizations meet this Institute’s requirement for consensus, balance, openness, and accepted norms. The ANSI Z41-1999 standard was accepted after the due process which was established under the recognized principles and rules. The Institute also designates the specific standards as American National Standards (ANS). The Institute also determines if the standards were developed in a fair, responsive, and accessible environment fair to the stakeholders. The acceptance of the products is quickened because of the voluntary consensus standards. It also clarifies how to improve the safety of the products for consumer protection. Presently around 9500 American National Standards (ANS) have the ANSI designation.

Enumerate the activities of ANSI? 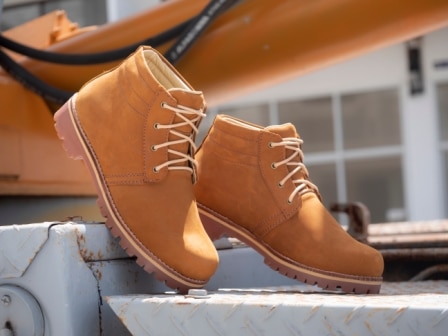